Please also see the FHC In The Press articles.

Farmington Riders Compete “On the Road” this Fall

FHC equestrians were busy this fall. Traveling to show both in-state and beyond, in hunter trials and national "A" rated hunter competitions, these accomplished riders were hard to beat. Marianna Bishop Wade and her sister Maria Bishop Shannon worked hard competing for top rankings in their divisions during the month of October and brought home some big ribbons for the Barracks: here’s a report from father Tom Bishop, ex- MFH and honorary whipper-in: 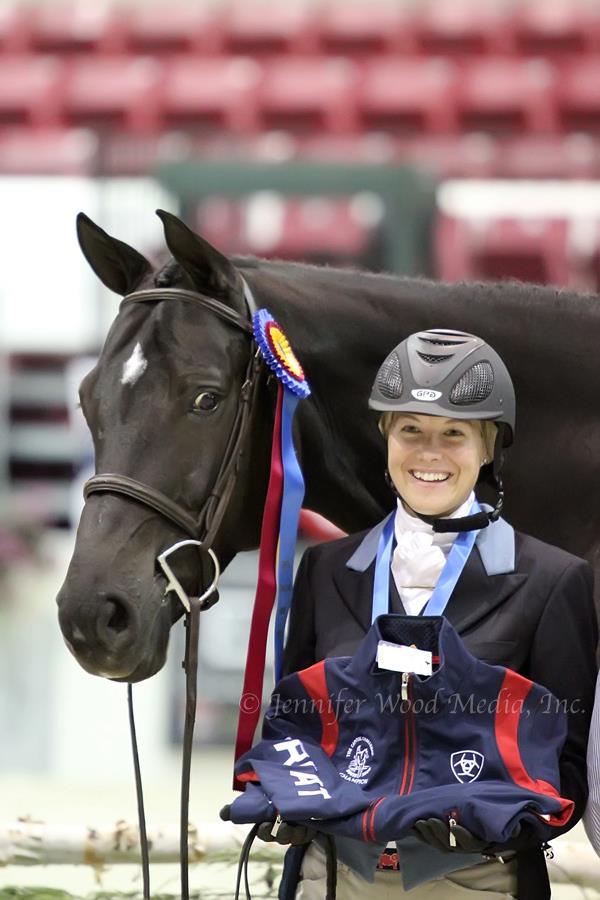 Castleton- Marianna Wade , Champion in the 18-35 year old Amateur Owner at 3'3".  (7th the first day, 1st in the Handy Hunter and 2nd in the Stake class, no hack prize) and 1st in the World Champion Hunter Rider 3'3'' Amateur Owner Hunter Challenge Class with scores of 87, 87.5 and 92.  It's no surprise that these girls have done so well, coming from a distinguished family of show professionals.Marianna reported that their mother and lifetime member of the Farmington Hunt Club,Claiborne Bishop received special recognition at Capital Challenge from the World Champion Hunter Rider program(sponsored by the United States Hunter Jumper Association): she was named World Champion Amateur Owner Trainer!

Falcon- Maria Shannon - 1st in the Handy Hunter and 4th and 11th in the other jumping classes.

Falcon- Maria Shannon- 6th in the handy, 11th in the stake in the 1st year greens

Castleton- Marianna Wade, 5th, 2nd in the handy and 10th in the stake no hack prize 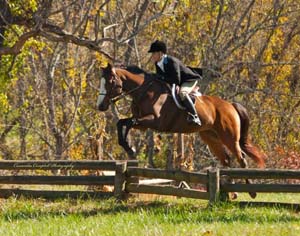 Dale Dealtrey and Stephanie Guerlain traveled to Sweet Briar College to visit our old friends there at the riding center, and to compete in the annual Bedford Hunt Club Hunter Trials held at the “Proving Grounds”.

Dale reported: “We were 5th in the Junior/Adult Amateur Hunters, 2nd in the Open Fox Hunters, 1st in the Seasoned Hunters, and 2nd with Stephanie and Abacus in the Pairs/Teams class. We also qualified for the Championship class and we won the Best Turned Out (in good Farmington tradition!)" photos courtesy Cassandra Campbell 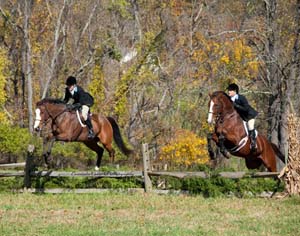 Stephanie reported, “This was Abacus' first show, and he placed 1st and 5th in the Green Hunters, 2nd in the Handy and in the Pairs with Dale, and he won the Executive Challenge trophy in the Championship Class, presented to the horse that the judge feels best meets the qualities of a good hunt horse. Camden placed 3rd in both the Green Hunter and the Open Foxhunter." photos courtesy Cassandra Campbell 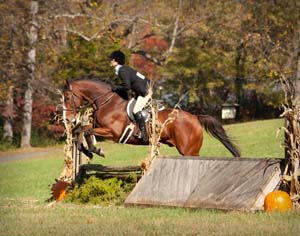 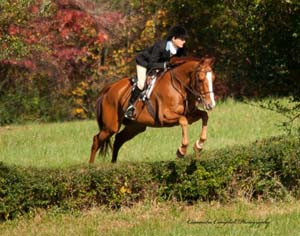 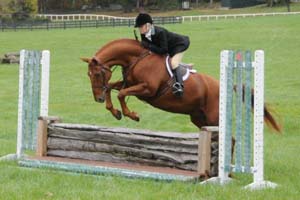 Report from Stephanie Guerlain, (who competed on her horse Eddie for their first try in this field hunter competition):

“Carolyn Chapman riding her chestnut gelding Burghley was selected
during the first day of the North American Field Hunter Championships for Sunday's finalist round. A big congratulations! Burghley is homebred, and his mother, also a homebred, won these same championships twice!”

“There were three of us who were returning champions for the prize called "Champion of Champions". So we each got a bottle of champagne: Kathleen O'Keefe who has won many times,Rick Laimbeer MFH Warrenton who won in 1997 (I was reserve).  He was reserve this year, and myself, Champion in 1998. They call it the champion of champions and used to have it as a separate award but haven't had any until this year.  For complete photos, visit www.lizcallar.com) I will go again next year!” 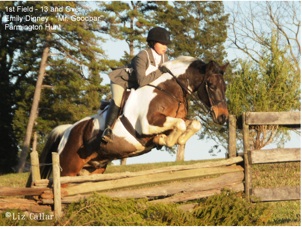 The JUNIOR NORTH AMERICAN FIELD HUNTER CHAMPIONSHIP is run by Mrs. Robert “Iona” Pillion,  Mrs. M. Douglas Wise-Stuart, MFH , and  Ms. Marion Chungo. FHC limited associate member Jennifer Nesbit has been involved with this fine event for many years helping find judges and encouraging participation among junior riders who love to foxhunt. According to event organizers,“Our goal is to stress the junior rider and their pony or horse; the fox hunting mount and its proper turnout is important, but their suitability for the young rider is foremost.  We hope the children, the future of our hunts, will come out for hopefully a great day of hunting, meet new friends, see new country, and realize how important our countryside is and do their best to protect it for their future generations.”

Liz King's Millington Stable loaded up a full van and drove a big group to Deep Run, along with other energetic FHC riders who were ready to ride the Sunday following Opening Meet. FHC riders included Emily Rector, Molly Duncan, Mary Quinn Martin, Sandy Kendall, Calvin Lewis, Stephanie Guerlain, Carolyn Brandt, Dale Dealtrey, Ellie Summers and Dr. Kelly Giunta. Molly Duncan, Emily Rector  and Pattie Boden reported that all riders and spectators had a fun day. FHC was well represented with respectable placings all around. Emily Rector and Kelly Giunta were first in the pairs class at Deep Run- as well as Emily placing second in a 2'6" division out of 33 , Mary Quinn placed 6th in the same class and Stephanie placed 6th in the other 2'6" class. Sandy Kendall and "Above and Beyond" placed 2nd in the handy hunter under saddle class. Pictured here are Molly and Mary Quinn who came in second in the pairs division. For a complete report and album of photos go to the Deep Run website, and Ranson Photography.

This show series is run exclusively for off-the-track thoroughbreds. This fall's November 6th show at the Lexington Horse Center was the biggest yet, with 30-45 horses in each class. Stephanie took all three horses and placed in several classes with Abacus and Eddie. Eddie, shown as "Curb Appeal" had also competed in the summer show and was awarded high-point ex-steeplechase horse for the series. He also finished out the year in 11th place in the Virginia Horse Shows Association Adult Amateur Associate division.

Hosted by Fairfax Hunt, held near Middleburg on Sunday, November 11, 2012 Farmington Hunt Club was represented by Joy on Seamus, Mark on Eli.

This Team Chase event was held in The Plains on November 18, 2012. Joy on Seamus, Mark on Eli and Middleburg Hunt member Tracy Cover formed a team winning 1st Optimum Time and 2nd Best Hunt Team in the Genuine Hunter Division. 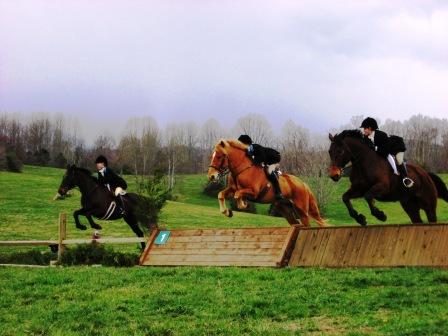 Farmington Hunt Members turned out at the Lexington annual Hunter Trials at the Virginia Horse Park April 2nd, and brought home many prizes throughout a day of changing weather and chilly conditions. Milllington’s Liz King trucked a barn full of riders and horses to participate in this popular event put on by Penny and Brian Ross at the Virginia Horse center in Lexington.The Farmington Hunt won the overall Championship with points accumulating to a total of 195. Overall First Flight Hunter Champion was Cheryl Microutsicos riding WoW! Graphic Designs Up and Coming- and that's not all! Congratulations to a hard working group of competitors and a wonderful show team for another terrific event organized by Penny and Brian. FHC swept the rest of the championship divisions! read on- here are the highlighted placings of the day for the FHC crew: 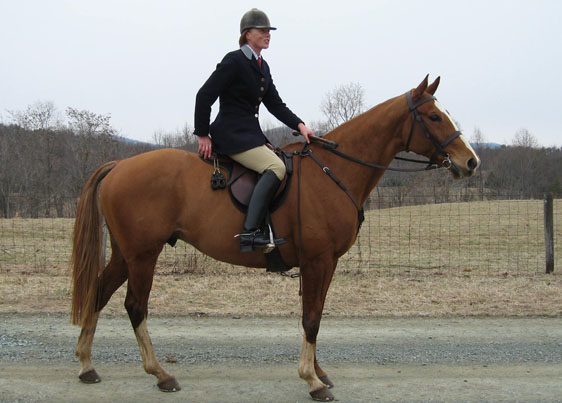 Fox Tracks: This is the second in a series of staff profiles to acquaint the membership with these important individuals who play such a valuable role in the Farmington Hunt. 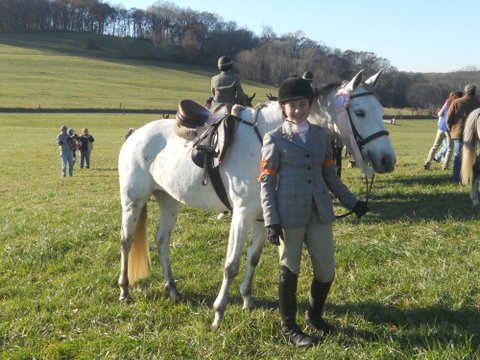 "A Day in the Life of FHC Professional Staff, Daron and Alison Beeney" 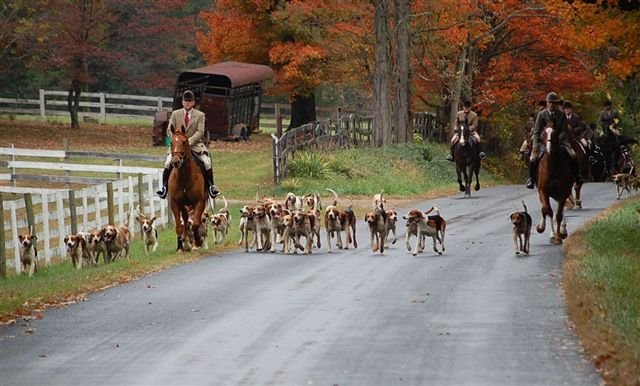 Fox Tracks:This is the first in a series of staff profiles to acquaint the membership with these important individuals who play such a valuable role in the Farmington Hunt.