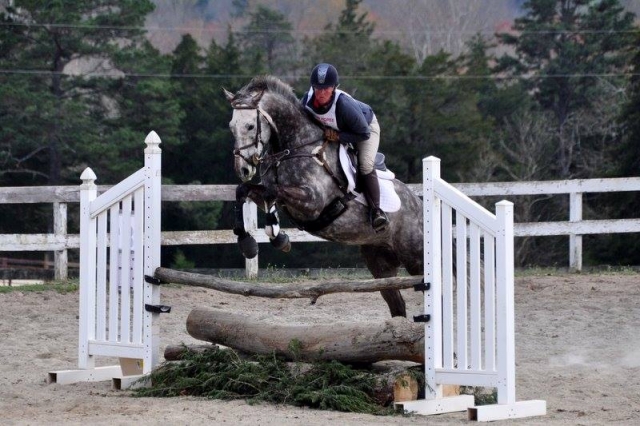 A jumper derby consists of courses that are a fun mixture of stadium and cross-country type obstacles. This year, we kept the courses in the ring due to all the rain we’ve been having. Baily Dent designed a very nice track that had some steering challenges, but everyone rose to the challenge and had a great day. Thanks to everyone who helped to set up and run the show, including Liz King, Jay Fennell and Carolyn Brandt as jump crew, Linda Uihlein at the gate, Kay Barquin and Karen Bull as announcers, Cynthia Riegle, Sally Powers, Becky Barlow, Tara Kurtz as secretaries, Stephanie Guerlain as judge, and Nancy Howell as Timer.  Special thanks to area trainer Debb Pyle for bringing two horses and also stepping in to help jump crew!

For the Tadpole and Baby Green levels, the first class of the division is judged on rider equitation and smoothness of the ride. For higher levels, the first class of the division is scored based on jump penalties with ties broken based on closest to "Optimum Time". The second class is Table II,2b (2nd round jump-off if first round is clear). Third class is "gambler's choice" (riders get points for every jump cleared within one minute: 10 points for jumps heading home, 20 points for jumps heading away, 30 points for jumps going straight across the ring). Oxers must be jumped in the correct direction, otherwise jumps can be taken from either direction and may be jumped as many times as desired, but no jump may be jumped two times in a row. If a jump is knocked down, points do not count and it may not be jumped again.