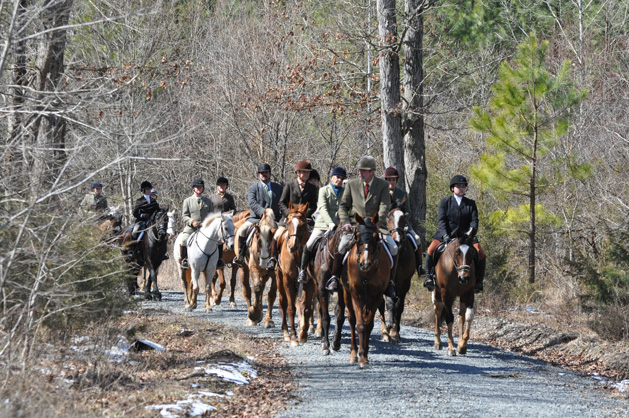 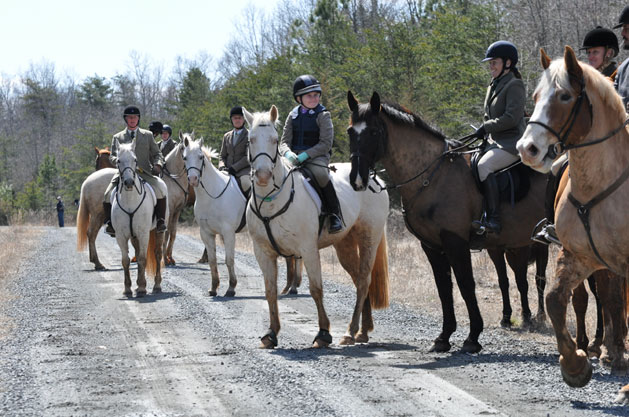 Joint Meet with Bull Run at Horseshoe in Rapidan

report by Beth Sutton with Carolyn Chapman and Liz King

Farmington Hunt traveled to Rapidan with 12 1/2 couple and a good gang of members for a joint meet with Bull Run Hunt Club. Hunting over an open and inviting fixture on Locust Dale Road near Rapidan, our huntsman Matthew Cook joined in with host huntsman Charles Montgomery for a full morning of fun hound work and good sport. According to reports from BRH staff Charles Brown, a red fox gave a good chase over the mountain heading towards Route 15, but vanished. Later that morning two coyotes were viewed on the main drive  but heading away from the fixture. A few minutes later, another red fox crossed the same road heading in to the woods. The there were ditches across the open fields at the base of the hills taking the run off from melting snow, full of spring time sounds and peeping frogs. Perfect habitat provided plenty of cover,plus open country for expansive views and nicely maintained wooded trails and farm roads allowed for great access. Coops were everywhere. What a way to end our season! Thank you again, Mike Long and family for allowing us to hunt over your beautiful property.Thank you BRH for partnering the ride: Boo Montgomery piloted the lead BRH vehicle followed by our road whips Grady Collier, Ken Chapman and Chris Cuthbert who kept close tabs on our hounds with radios in the truck; Mike Long, MFH and landowner ,1st flight leader Rosie Campbell kept up with Matthew Cook and Charles Montgomery, followed by Charlotte Delany and Reynolds Cowles. Honorary whipper in Barbara Smith rode along with FHC whip Carolyn and Jamie Altman with John Elliot.  Thank you to all the staff for all our hunt clubs who have worked so hard to make this year a success.