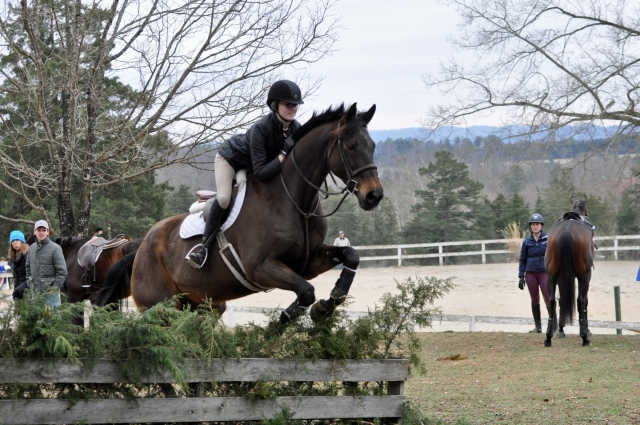 Farmington Hunt Club hosted one of the first of their 2018 season line up of horse activities at Millington Stables on Sunday March 11. Cloudy skies and chilly temps kept the enthusiastic group of competitors moving briskly through dressage tests in the morning and stadium course and cross country fun in the afternoon. Volunteers from Millington and the hunt club assisted with the various tasks to aid event manager Stephanie Guerlain with  Liz King,( FHC MFH). FHC Vice president Kip Holloway judged stadium, Amy Hurt scored dressage, and Carolyn Chapman monitored the cross country competition over the course set up by Liz King for the day's event. For complete event results, see report from Stephanie Guerlain. (see a few selected Photos by Beth Sutton-more available by request.)

40 horses and riders came out to Millington Stables on Sunday, March 11 to compete in the Schooling Horse Trials/Combined Test/Dressage show. Thank you to all the volunteers who helped to prepare and run the show: Karen Bull, Liz King, Carolyn Brandt, Linda Haschart, Mary Minor Henderson,Nan Young, Linda Uihlein, Carolyn Chapman, Ed Herring, Robin Lundgren, Robin Ellis, Jebb Cuthbert, Kip Holloway, Amy Hurt, Nancy Howell, Baily Dent, Misha Bordwell, Lara Morris, Kenny Chapman, James McKinley, Trina Player, Becky Barlow, Carter McNeely, Beth Sutton, and all the exhibitors and spectators. We weren’t quite 100% organized, but it was literally a 3-ring circus being led by a ringmaster who was two states away, with a snowstorm predicted, so considering all that, it actually went off very well and I heard nothing but good reports from everyone I spoke with. Some riders just chose to ride in show jumping and/or cross country, but for those who did a Combined Test (dressage + stadium) or horse trials (all 3 phases) and those who just did dressage, we have the following results: