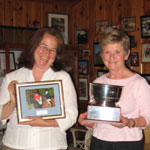 At the Annual meeting on April 27th at the Clubhouse, members gathered to hear reports on committee accomplishments and club activities for the past 2010-2011 hunt season. Highlighting the evening's excitement was the presentation of the second annual Jill Summers Award by B.J.Korol to this year's worthy recipient, April Fletcher. B.J. remembered, "Jill always turned out impeccably, no matter what the weather she looked perfect. Some traditions are worth remembering, and good turnout is one of them." Noting April Fletcher as someone who has over the years upheld the standards Jill set for the field, B.J. presented the silver bowl to April before an assembly of approximately 47 members who attended the meeting. 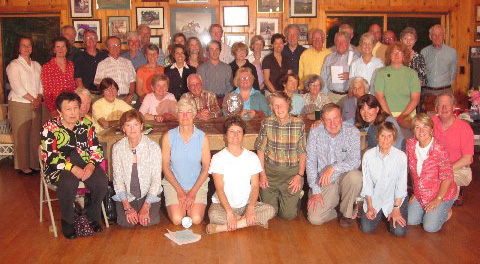 FHC members 4-27-2011 gather around the crystal vase that is the MFHA Hunting Habitat Conservation award received by JB Birdsall and the club in January.

The annual Julian Beckwith award for outstanding service to the FHC went to long time member Mary Harp who manages the popular annual Fall Show at the Barracks. Reynolds Cowles noted the difficult selection process that the board undertakes each year to choose the Beckwith winner, and Mary's efforts over the years make her a most worthy recipient.  Also on the agenda for the evening was the election of new board members coming in for a three year term: Jay Fennell, Bonnie Hanks and B.J.Korol. Officers Reynolds Cowles, President, Mark Thompson, Vice President, Treasurer Jim Bourie and Secretary Pattie Boden were re-elected by acclamation. Following the meeting, a light pot luck dinner was served during a social hour for all.