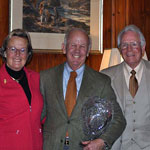 FHC and J.B.Birdsall honored at annual meeting in NY 1/28

Farmington Hunt Club and J.B.Birdsall were awarded the 2011 MFHA Conservation of Habitat Award in New York at the Union Club on January 28th at the MFHA Annual meeting. 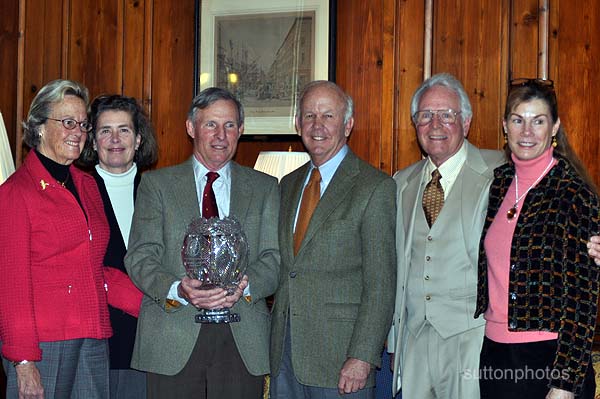 Virginia can now add one more feather to its cap of land preservation credits. On Friday, January 28th before an assembly of several hundred representatives from hunt clubs at the annual meeting of the Masters of Foxhounds Association (MFHA) at the Union Club in New York City, Albemarle county resident John “J.B.” Birdsall and Farmington Hunt Club Masters Carol Easter, Joy Crompton and W. Patrick Butterfield accepted the coveted Hunting Habitat Conservation Award given annually to the hunt club in the US and Canada that has “made a significant difference” in conserving and protecting open space and habitat for wildlife. Farmington is the fourth in a line of distinguished Virginia hunt clubs to receive the award since it began in 1997, following northern Virginia neighbors Orange County (1998), Blue Ridge (2007) and Piedmont (2009).

The Farmington Hunt has been a community institution in Albemarle County, Virginia since its establishment in 1929. Farmington Hunt Club members are predominantly local residents and landowners who are keenly aware of the importance of land conservation. Mr. John “J.B.” Birdsall is a long time foxhunter, married to Mary Scott Birdsall, a Charlottesville native whose father Evernghim Blake owned Schelford Farm, situated at the heart of the Farmington Hunt territory.

Since 1987, J.B. has been the principal driving force in establishing a culture of land conservation and habitat preservation within the Farmington Hunt. Farmington claims over 65,000 acres of protected land within its designated territory of over 14 square miles in Albemarle, Greene and Fluvanna Counties. Twenty- three of the thirty regular Farmington fixtures are protected by conservation easements.

Leading by example, and by helping change the tax laws Birdsall, has persistently lobbied to preserve open space for future generations. Various members of his family have obtained 12 easements for different parcels in Albemarle County- a total of 1,700 acres of their own land and they have encouraged friends, neighbors, and landowners in the region to follow their leadership resulting in the protection of un-told thousands of additional acres.

According to Rex Linville of the Piedmont Environmental Council (PEC),

“He was directly involved with lobbying (many members of congress – not just from Virginia) and working with PEC staff to make this happen. This resulted in the creation of Section 2031(c) of the IRC which now allows landowners to exclude up to 40% of the value of their property from their taxable estate. This exclusion is capped at $500,000. JB is now one of the primary sponsors of our and the Land Trust Alliances effort to expand this further so that the exclusion is 50% with a $5,000,000 cap.”

In accepting the award, Birdsall said, ““I'm pleased, of course, to be receiving the award. I'm really happy for Farmington to be in the same company as Orange County, and my only sadness is that neither Charlie (Whitehouse-former Orange County MFH), nor his successor as Chair at PEC, Eve Fout, are still with us to see how far their pioneering work has come.”