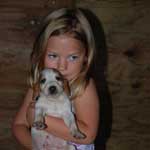 The annual Farmington Hunt Puppy Show was held at noon on Sunday, the first day of summer 2010, June 20th at the Kennels. Pimm's Cup and other cool refreshments were served ringside by Forbes and Sherry Reback, and a post show luncheon was served at the clubhouse by BJ Korol, with help from Kay Barquin, Shelley Thompson and Pattie Boden.The hunt staff, Daron and Alison Beeney and Kennelman Tom McCauley made sure the grounds were in beautiful shape for the event that welcomed a good crowd of members and visitors from out of town and the neighborhood. Guest judges were Mrs. Phelps S. Hunter, ex Master of Los Altos, and Martyn Blackmore, Huntsman of Loudown West Hunt. Daron handled the hounds with assistance from the professional staff, and the young entry demonstrated excellent performance and conformation. The placings were as follows:

Awards for "best walkers" were presented to the Chapmans and Liz King by Jt MFH Joy Crompton and Huntsman Daron Beeney. Click here to see photos.