The history of the Farmington Hunt Club originally began with the old Albemarle Hunt Club. When the Albemarle Hunt disbanded due to the trying times of World War I, several private packs continued hunting the same territory. 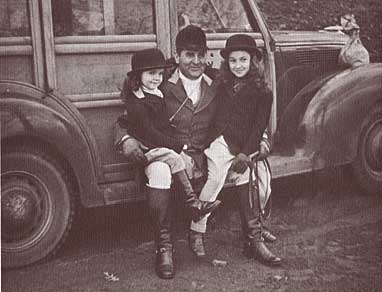 Carolyn Copp, Grover Vandevender and Gloria Galban wait to cast the hounds
before a meet. Carolyn starred in the movie "Virginia," made in Charlottesville
in 1940. An impatient hound tries to get a whiff of things through the rear window.

In 1929, a group of area landowners and horsemen decided to revive and reorganize the old Albemarle Hunt with with its Belgian Blue colors under a new name, Farmington Hunt Club, which would be governed by more formal conditions set by the National Foxhound Club of America. The Farmington Hunt acquired permission to hunt over farms in western Albemarle County. Hounds were purchased or gifted from the private packs and local farmers. Grover Vandevender was elected huntsman, a position he held for thirty-two years, and agreed to kennel the hounds at his place near Ivy.

At first, Hunt members gathered in private homes for social events or at the Farmington Country Club, where a large show ring was built in 1934 for hosting horse shows.  In 1939, the Hunt bought the old school house on Garth Road and converted it to a clubhouse. This building was outgrown by 1951, so the hunt purchased land next to Grover Vandevender’s property at the intersection of Garth and Free Union Roads (now referred to as Hunt Country Corner). There, they built a clubhouse, stables, kennels, a new horse show ring as well as a swimming pool and a paddle tennis court.

By 1984, the pressures of growth and closing of land along the Garth Road corridor triggered a move to the current location north of Free Union. A clubhouse was built as well as homes for the hunt staff, hunt stables, and kennels where Farmington Hunt’s now predominately Crossbred pack, a product of decades of careful breeding by Jill Summers (M.F.H. 1968-2008), is housed.

She led by setting a good example, all the while taking the most pleasure in "a good pack of hounds, a good horse, good friends to share the day with and hopefully a straightnecked fox.”